39 ways to use delicious bacon Fat 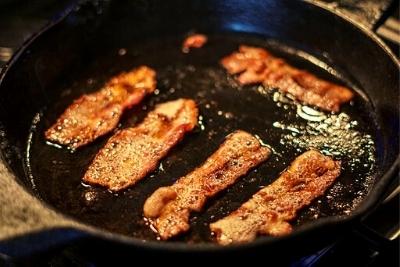 The ways you can use the bacon fat you get while cooking it.

While cooking bacon, you get lots of bacon fat. I haven’t always been a bacon fat saver yet, I always think it’s a shame to toss it – such a great food enhancer. You can use it for baking, sautéeing, and anything you’d use butter. When chilled, it’s more like bacon butter than bacon grease. If you don’t want to save it by yourself, you can actually buy it, too (even by bulk).

Bacon fat is surprisingly considered as a healthy fat. It is higher in monounsaturated (“healthy fat“) fat than butter. Saturated fat is about 40%. It doesn’t contain trans fat (“bad fat”) like margarine. It has slightly less cholesterol than butter, the same calories as canola oil, but a lot more saturated fat and sodium.

You need only a small amount to get the flavor. Of course, moderation is the key, though it’s a healthy fat.

We love duck-fat fries. Why not bacon fat? I’ll show you delicious ways that you can use up the leftover bacon fat.

Bacon Grease: the byproduct of cooking bacon. When you cook bacon, you are essentially rendering the solid fat into a liquid by heating. It has been flavored by the seasoning/ brine/ smoking of the bacon.

Leaf Fat: the fat comes from around the kidney and loin.

Leaf lard: Rendered leaf fat with a more mellow flavor than regular lard. It is considered the highest grade of lard.

Lard: Rendered/cooked down pork fat, not from leaf fat. It is considered a pure fat with a flavor. All other pork fats can be rendered down the same way but are not as good as Lard.

The key: Cook the bacon slowly, on medium-low heat.

Do this on the stovetop in a cast iron pan, because it retains heat and helps you cook bacon more evenly. Also, the bacon fat will help season the cast iron pan. But any pan will do.

Once you finish cooking the bacon, remove it from the pan and pour the bacon fat into a jar. Make sure not to pour the hot fat into any jar that might crack or melt.

A half-pound of bacon may yield anywhere from 4 tablespoons to 1/4 cup of rendered fat.

If you use bacon fat regularly in your cooking, you can store it in the container on your kitchen counter for a week or two.

Don’t add freshly rendered bacon fat to the previous batch container. It has a fairly long shelf-life, but it won’t last forever. Exposure to heat, light, and oxygen can cause it to turn rancid, and adding new fat to rancid fat (or nearly rancid fat) will just ruin all of it. Simply cover the jar with a piece of plastic wrap and store it in the fridge.

If you plan on storing the bacon fat for more than a few months, strain out the solids first before pouring it into a jar. You can also find a container with a filter like this.

What to cook with bacon fat

Bacon fat is such a flavorful fat to cook with. Basically, you can use it for frying anything that would benefit from having the bacon flavor. When cooking with it, spoon it out from the jar and half a teaspoon is all you need.

If you don’t want to save it for cooking, just wait for it to cool down and harden, then toss it. Or line a container with foil, pour the liquid fat in, let it harden, and then pull out the foil, wrap up the fat, and toss it.