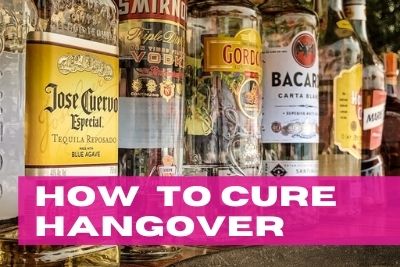 Drinking booze is fun, but not so much after “too much drinking”. Prevention is the key, but I know not all of us would do it. So let’s learn how to cure a hangover in many ways.

Hangover sucks. So before you drink (too much), learn about a hangover (hoping you can avoid a hangover at all the costs).

A hangover is a group of icky symptoms that can develop after drinking too much alcohol. Ethanol (a type of alcohol in booze) messes with various systems in your body.

Your liver has to overdrive to metabolize ethanol and acetaldehyde (a more toxic byproduct that your body creates after drinking) to get them out of your body system. Acetaldehyde is the main reason behind all those problems associated with hangovers. You’re left with unregulated blood sugar and inflammatory compounds, which can lead you to feel hungover.

As a general rule, the more alcohol you drink, the more likely you are to have a hangover the next day. Most hangovers go away on their own, though they can last up to 24 hours. But there’s no formula for how much you can safely drink to avoid a hangover: There are many factors that affect hangover.

There has been little research into developing effective treatments. Many factors can affect the severity and length of a person’s hangover, which makes it difficult to study potential hangover cures:

When do hangover symptoms happen?

Choices to make you feel worse

Skip the hair of the dog

Drinking to ease the symptoms of a hangover is sometimes called taking the hair of the dog, or hair of the dog that bit you. The notion is that hangovers are a form of alcohol withdrawal, so a drink or two will ease the withdrawal. This is because alcohol changes the way that methanol (a chemical found in alcoholic beverages), is processed in the body. After you drink alcohol, methanol is converted into formaldehyde, a toxic compound that could be the cause of some hangover symptoms.

However, drinking alcohol in the morning is not the solution. An alcoholic beverage will further dehydrate you and likely lead to worsening hangover symptoms when the buzz wears off. It also doesn’t allow you to recover, so don’t drink alcohol to cure a hangover!

A large fatty meal is actually better at preventing a hangover than curing one. Fried foods can irritate the stomach.

Avoid citrus juice because the acid in sour citrus fruits like orange and grapefruit can irritate an already sensitive stomach.

Drink fluids! Alcohol has a diuretic effect: Drinking alcohol blocks the creation of a chemical called vasopressin – kidneys will send water straight to the bladder instead of retaining it in the body. Drinking alcohol increases the production of urine, leading to a loss of fluids and electrolytes. Electrolytes help you retain more water and pee less, which is good for fast rehydration. Drink your electrolytes before bed!

Although dehydration is not the only cause of a hangover, it contributes to many of its symptoms: dizziness, fatigue, vomiting, fever.

Nothing hydrates better than water. Increasing your water intake may help alleviate some symptoms of hangovers and even prevent them altogether.

Since your drinking, your liver has been working hard to filter the alcohol out of your system. Adding lemon can help it. Lemon-infused water supports detoxification by boosting liver function and tissue regeneration and adding over 100% of the daily recommended dose of vitamin C. Squeeze the juice of half a lemon into a glass of water and drink up.

Medical grade drinks like Pedialyte was specifically made for dehydrated babies suffering from vomiting. It’s packed with electrolytes – “10 Gatorades in one bottle”. The method of rehydration is similar to Gatorade. Pedialyte has lots of sodium and potassium, but fewer calories and less sugar than Gatorade. Tip: drink before you go to bed!

Sports drinks like Gatorade hydrates better than water by packing in potassium and sodium, which are both electrolytes. Electrolytes help you hydrate quickly by telling your kidneys not to pee so much. Since it’s a sports drink, Gatorade also has carbohydrates, sugars, and added calories added in to help with endurance.

When the liver metabolizes ethanol, it produces a chemical byproduct called acetaldehyde (responsible for headache and nausea that comes with hangovers). Acetaldehyde eventually turns into something called acetate (makes your symptoms let up). Drinking soda expedited the process by which acetaldehyde turns into acetate.

Eating helps to cure the hangover, but you often feel like you want to pass the food. Why not drink breakfast instead? Smoothies do that job well.

Hydrate and replenish all that lost potassium, vitamin C, fiber, antioxidants, and natural sugar in one shot with this smoothie: 1 banana, 1 cup of unsweetened Greek yogurt, a handful of beet greens, 1 tablespoon coconut oil, ½ cup strawberries, ½ cup coconut water, and ice. Adding fat like coconut oil to greens helps you absorb the nutrients.

Oatmeal contains complex carbohydrates that provide a slow and steady release of sugar into the bloodstream and may help with hangover symptoms. Make the oatmeal smoothie: oatmeal, brown sugar, milk, a banana for potassium.

As your blood alcohol level rises, your blood sugar level is going to plummet. Make sure to consume those sugars, vitamins, and electrolytes you sacrificed the night before by drinking juice. Learn more about juicing.

Alcohol depletes your fluid and essential electrolytes like potassium. Coconut water is naturally rich in electrolytes, which makes it incredibly hydrating. Coconut water also has more potassium per ounce than a sports drink and is free from artificial colors and sweeteners. Potassium helps control the amount of fluid in the body, maintains a healthy blood pH level, and is vital to cell function.

Excessive drinking can create free radicals, which increase your risk of disease, but the beta-carotene found in carrots helps remedy this. Ginger’s anti-inflammatory compounds will help alleviate nausea, and apples provide vitamin C. Plus the sweetness from the fruit’s natural sugar will make your juice taste better than salad.

Beets contain betaine, which is an antioxidant-rich in anti-inflammatory compounds. Add pineapples to add more vitamin C and flavor.

After consuming alcohol, the liver metabolizes that ethanol. Beets contain betaine, which is an antioxidant-rich in anti-inflammatory compounds. Beet juice will help your liver cleanse your body.

One of the major vitamins depleted by alcohol is vitamin C, which supports immunity and acts as an antioxidant. We need vitamin C to support our immune system and act as an antioxidant to scavenge for free radicals, which cause inflammation and tissue destruction.

Vitamin C also helps your body produce collagen, which makes your skin look young. Alcohol intake also contributes to low blood sugar, which explains your sugar cravings. Orange juice is a classic cure that gives you the natural sugar for an energy boost.

Rutabaga contains a high amount of dietary fiber, protein, vitamins (B vitamins such as thiamine (B1), riboflavin (B2), niacin (B3), pantothenic acid (B5), folate (B9), vitamin B6, and vitamins A, C, E, and K), minerals (calcium, choline, iron, magnesium, manganese, phosphorus, potassium, and zinc), and fatty acids (omega-3 and omega-6 fatty acids).

Eating rutabaga in excess may cause unwanted gas issues especially with individuals who have kidney problems. If you are allergic to cabbage, turnips or spinach, you may want to avoid eating rutabaga.

Tomato juice can boost liver function, which speeds up alcohol digestion. Other research suggests that the antioxidants and vitamins in tomatoes quickly restock those lost during drinking, making you feel better faster. And no, Bloody Marys don’t count here (unless, of course, they’re virgin).

Pickle brine is loaded with sodium, a valuable electrolyte you would be lost after drinking.

Tea offers various health benefits including a cure for a hangover. It settles your upset stomach and prevents nausea.

Green tea is packed with antioxidants, which keep your organs healthy: a healthier liver will help you recover faster. If you’re feeling nauseous, add rosemary or lavender to your tea so they’ll calm your stomach fast.

Ginger alleviates nausea and lemon supports your liver, which is in overdrive metabolizing all that ethanol (alcohol). Boil some water and add fresh slices of ginger and the juice of half a lemon.

The zing of either ginger or peppermint can soothe the stomach and ease the urge to upchuck.

“Bone broth” is made from animal bones and connective tissue – typically cattle, chicken, or fish. It has been boiled into a broth and slowly simmered for 20+ hours with herbs, vegetables, and spices, extracting the amino acids, minerals, and collagen to support digestion. It contains L-glutamine (supports the health of your small intestine) and glycine (supports detoxification).

Drinking alcohol depletes another important electrolyte: sodium. Our body requires small amounts of sodium for nerve and muscle function, as well as fluid balance. Miso (fermented soybean) has a naturally high amount of sodium, probiotics, and antioxidants that help soothe digestion and protect against disease.

It’s a lot of the same ingredients as a bloody mary without any alcohol: a whole raw egg, Worcestershire sauce, hot sauce, salt, and pepper.

Most of these remedies encourage your body’s removal of toxins – the faster they leave your body, the faster you will feel better. There’s another way you can do it: Consume spicy food makes you sweat, releasing those pesky hangover-causing toxins, and makes you drink more water.

Honey is made up of mostly fructose that forces your body to get rid of the remaining alcohol faster. Adding honey helps to replenish the sugars that are lost from the night before, and helps to get rid of that biting headache.

Bitters are mostly used as cocktail ingredients and contain alcohol. But their original purpose was medicinal, which is why grocery stores are allowed to sell them. Underberg, a German bitters with a secret recipe consisting of aromatic herbs from 43 countries and naturally occurring vitamin B1.

Save
Author: Kiki
Filed Under: DRINKS / ALCOHOL
What’s so special about Japanese Whisky?