How to master ingredients of sushi in 4 simple steps 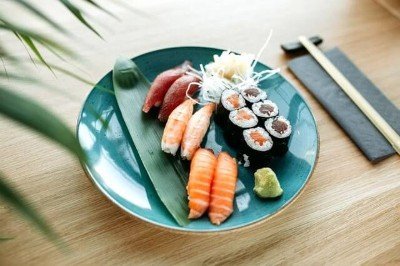 Ingredients of sushi are pretty simple – basically fish, rice, and a few seasoning. Let’s learn how to master sushi ingredients – in 4 simple steps.

How to master ingredients of sushi in 4 simple steps

Sushi is getting so popular all over the world, yet many people still don’t understand what’s sushi, how to eat sushi properly, and how to enjoy sushi at the sushi bar, etc. So you’ll learn a lot more about sushi ingredients here.

Sushi is made of a piece of fish and seasoned rice (with vinegar). However, this is just one type of sushi created in 1820s, called “Edomae zushi”. The Edo people were known for their busy lifestyle, so fast foods became so popular. Edo style cuisine is known to be saltier and sweeter compared to other cuisines in Japan and applies to other fast foods like tempura (“Edomae tempura) and unagi.

Vinegar, salt, and sugar extend the food shelf life. Eel, shrimp, and shellfish were simmered in broth. Tuna were immersed in soy sauce (zuke method). Mackerel and gizzard shad were cured with salt and vinegar. Vinegar in rice preserves it from spoilage (and enhance the flavor of the ingredient). Wasabi was used to kill bacteria.

– Always focusing on the flavors of one ingredient

Simply to emphasize the local ingredients from the Tokyo bay, such as tuna, halibut, bonito, sea eel, and shellfish.

1) Ingredients of sushi in Japanese

Sushi ingredients are mainly seafood (raw or cooked) and some vegetables. But there’s no rule. Great sushi chefs create interesting/exciting flavor combinations with various ingredients and seasonings. Or they go simply straightforward to emphasize the flavor of ingredients. Sushi components are so simple (basically rice and fish), so chefs must be so creative to make it great. Even small mistakes would show it right away – sushi is simple yet DEEP. That’s why eating sushi is so fun to see their skills, imagination, and creativity (not just the quality of ingredients).

The majority of the seafood we eat is imported and has been frozen at some point.

“Flash frozen”: fish are rapidly frozen at low temperatures to prevent the formation of ice crystals and preserve quality – at the peak of its freshness. Basically, the slower the seafood freezes, the larger the ice crystals that form between the fibers of the protein become, which can impact flavor and cause fish to dry out. So, flash freezing helps retain its flavor, texture, moisture, shape – freshness, and nutrition.

Minimizing the time between capture and freezing prevents the deterioration of quality that naturally begins the moment seafood hits the air.

These days, technology is such that fish are either frozen right at sea (most common with farmed fish, as freezers are incorporated into the farm sites) or immediately upon landing at port. “Previously frozen” – all of which means that frozen can be fresher, or at least in better condition.

Another reason for going frozen is that it decreases waste and takes advantage of seasonal bounty to spread its availability throughout the year.

And the assumption that fattier varieties such as salmon and tuna fare better, texturally speaking than leaner fish when frozen doesn’t hold true, either. In fact, it comes down to proper freezing and handling on the front end, and proper thawing – in the fridge, out of the package – on the back end.

A 2016 study funded by the National Fish and Wildlife Foundation that tested consumer preferences for fresh black cod and coho salmon vs. frozen (both bought at retail) found that the frozen fish were both rated superior or equal to their fresh counterparts. The study also measured the quality of those frozen and fresh fish, based on the conductivity of cell structure, and found that the overall score of the frozen fish was at least three times higher than the fresh fish

However, not all frozen are the true meaning of capturing the freshness naturally by freezing. Check the label for additives. Sodium tripolyphosphate is a chemical that is used to retain moisture. CO2 is sometimes injected to fish like tuna to keep the color bright.

Fish in the fish tank at a restaurant – it’s not the freshest seafood you could get. While transporting the fish to the fish company to the restaurants, fish aren’t fed and stressed by the capture, being in the small container, and transportation, etc. They might stay in the fish tank at the restaurant for a while – of course, no feeding and more stress/exhaustion. The quality of fish decreases due to it. Freezing right after fishing is a much better way to capture quality – unless you literally eat it right on the spot.

This is one of the most critical elements of sushi. It’s not just “rice”. It must be cooked well, seasoned well, and held well so that you can hold it well with your hand but crumbled in your mouth. Sushi got only fish and rice, so any shortcoming will show.

In Japan, it takes years to just washing rice. More years to cook sushi rice. It’s a part of training to be a sushi chef. One of the Japanese features, “Shokunin Katagi” (craftmanship in Japanese). Secrets for innovation – continuous improvement (“Kaizen“) of skills to your best of ability. Every element is extremely important, especially for sushi.

Use white (polished) short-grain Japanese rice (japonica) or medium-grain California rice. Don’t choose long-grain rice (Basmati and Jasmine) and brown rice. They have less water content than short and medium-grain rice, so harder to stick together as “shari” (sushi rice in Japanese).

It should be fluffy but firm texture. If too hard/dry, it means it was undercooked or needed more water (which is fixable). If too mushy, it means too much water or overcooked. Rice is my only carb, so I use a rice cooker to make it perfect (easy!).

You need sushi vinegar, salt, and sugar. “Sushi vinegar” is rice vinegar that sugar and salt have already been added (and often also flavor enhancers like “konbu” – kelp for the stock). If you don’t want to make sushi vinegar by yourself thinking about the ratio and its amount, sushi vinegar is ready to use.

Where to buy: You can go to Japanese or other Asian markets to buy rice, vinegar, and other ingredients.

I should say there are 2 major seaweed sheets – Japanese and Korean.

Japanese nori sheets for sushi have 9 grades – by color, shininess, weight, thickness, spots (holes), and mix of other seaweeds. The higher the grade gets, the better quality you could get. They are tastier, darker, better texture, and more expensive. If you want to upgrade it, you could spend more money on it.

Korean one (Gim) is seasoned with salt and sesame oil. It’s not as smooth as the Japanese one in terms of texture. It’s pretty tasty, but it gets sticky thanks to the sesame oil.

This is one of the major components of sushi, but this could vary – it’s up to the chef’s creativity. It’s totally up to you, but at least you should have:

The Japanese version of what we know as Chinese soy originated as a byproduct of making miso paste. Tamari is pressed from the liquid that drains from a miso paste (fermented soybean paste) as it ages. Classically, it’s made with only soybeans (and no wheat), making it more similar in flavor to Chinese style soy sauce. It’s a great option for those who are gluten-free (mostly). It is a thicker, bit sweeter, less salty, more balanced, darker color, and richer umami flavor fermented soy sauce.

When should you use tamari vs. soy sauce?

Substitutes for Tamari and Soy Sauce

Differences between Tamari and Soy Sauce

Technically, Tamari is a type of soy sauce. However, it differs from traditional soy sauce due to its fermentation processing, thickness, flavors, and wheat content. Both are byproducts of fermented soybeans, but these are the comparisons and differences:

How To Make Wasabi Paste

Wasabi paste (by powder) is easy to make.

Other stuff on sushi ingredients

What’s special about the label “Sushi-grade’ fish? The answer is there is no standard as regulations. It simply means it could be the higher quality that you can be comfortable with eating it raw. Fish are flash-frozen on the boat after they are caught, which kills any parasites that they might contain and keep them fresh.

Major sushi types – sushi, sashimi, cut rolls, and rice bowl. Whatever the type is, the ingredients of sushi are the same. I’m talking about traditional sushi. You see some appetizer offerings, but not so much of a meal combination of non-seafood protein like chicken.

The smallest maki rolls are thin and rolled tightly. They contain fewer ingredients and have only nori seaweed on the outside. One popular combination is tuna with cucumber.

These largest maki rolls usually get cut thinner due to their size. It contains many ingredients, so it gets big.

Neither traditional nor very Japanese, uramaki rolls are “inside out” with the nori seaweed wrapped around ingredients in the middle and rice stuck to the outside.

a cone-shaped hand roll made of nori seaweed and filled with rice, fish and other ingredients.