Everything you need to know about Korean BBQ and Japanese BBQ 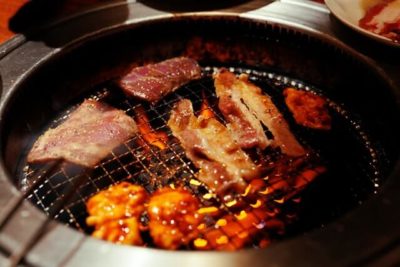 Everything You Need to Know About Korean BBQ and Japanese BBQ. What are the differences?

Everything you need to know about Korean and Japanese BBQ

It’s a tough BBQ war – Japanese vs Korean BBQ. Both taste good and look very similar – they cook meat and vegetables on a grilled top. To make it clear, I’ll deconstruct each BBQ and compare both features so that you can learn everything you need to know about Korean and Japanese BBQ.

In a typical Korean BBQ restaurant, every person gathers around a grill, which is mostly placed in the middle of a table. You will be served with plates of meat (raw), as well as other side dishes, like banchan, and then everyone can start to cook and eat their own food.

1) Bulgogi: made with beef sirloin or tenderloin. The meat is sliced thinly and marinated. Marination is an important step.

2) Galbi: made with beef short ribs. Bulgogi is the most popular form of Korean BBQ and the one with which westerners are more likely to be familiar.

Traditionally grilled with different fuels, like electricity, gas, and charcoal. Tabletop cooking, cook together with family and friends.

Typically at American BBQ, only 1 person grilled the foods. But everyone participates in grilling at Korean BBQ.

Unlike Japanese BBQ, a bunch of small dishes (called “banchan”, mostly pickles like Kimchi) is automatically come with. Pickled vegetables, potato salad, braised fish, noodles, etc. They are refillable and free! It’s not meant to be an appetizer. You do eat those with meats – putting them on the lettuce with meat and wrapping to eat, though you can eat it as appetizers, too.

Despite all the banchan, they do have more side dishes to offer.

Various meats, yet a majority of which are pork and chicken. Not a lot of beef unlike J-BBQ, yet beef ones like Galbi (short ribs) and Bulgogi (tenderloin) are more known for K-BBQ. I find excellent pork dishes in K-BBQ. Like Japanese BBQ, you see items like intestines and beef tongue. Most meats are marinated already.

Unlike Japanese, you don’t find high-end quality meats generally. Marination basically covers the poor quality of meats. I see a few high-end Korean BBQ in LA, but the quality of beef is nothing like Japanese high-end meats.

Having said that, you must try “Galbi” (marinated short rib) and “spicy pork” out of all. Those are very unique and delicious meats!

Unlike Japanese BBQ, they provide scissors for the bigger cuts of meat (pork belly, kalbi, and chicken).

They do offer simple cut vegetables, but not as much as Japanese ones since they already have “banchan”, side dishes, on the table.

Mostly spicy seasonings. Less dipping sauces than Japanese BBQ since most of the proteins are already marinated.

It is customary for the meat to be bundled in lettuce along with a few toppings, such as spicy paste and kimchi, and eaten like a wrap.

The reason why Japanese BBQ looks similar to Korean BBQ was simply Koreans in Japan introduced their BBQ to Japan originally. Japanese liked it so much, so adopted it and gave their own twists. But there are some big differences between Japanese BBQ and Korean BBQ.

1) Teppanyaki – food grilled on an iron plate like Benihana
2) Yakiniku – originated from Korea. So this is the one I compare with Korean BBQ.

Traditionally grilled with different fuels, like electricity, gas, and charcoal. Tabletop cooking, cook together with family and friends.

Typically at American BBQ, only 1 person grilled the foods. But at Korean BBQ, everyone participates in grilling.

The sides don’t come automatically like banchan – mostly Korean ones like kimchi and sanchu (not so much “Japanese” ones). Japanese BBQ restaurants charge you the sides. Banchan at Korean BBQ comes automatically and free.

Beef is the predominant protein and some intestines for J-BBQ. In J-BBQ, pork and chicken aren’t as popular as K-BBQ.

This is one of the biggest differences from K-BBQ: Japanese BBQ uses high-end quality meats like Kobe beef. Hence, they offer very little marinated meats unlike Korean BBQ. Japanese BBQ is all about the high quality of the ingredients. Naturally, Japanese BBQ is a lot more expensive than the Korean one.

Some of the popular Japanese BBQ meats:

Dipping sauce – sweet, spicy, lemon & sesame oil, seasonings like salt, matcha powder, etc. There are more than Korean BBQ since many of the meats for Japanese BBQ are high-quality and served without marinade to emphasize the flavors of meats. Miso is often accompanied with guts.

Unlike K-BBQ, the lettuce doesn’t come with it. Of course, you can order it at an additional cost to eat like K-BBQ – it’s just an option. Once the meat is cooked and ready, it is handled with chopsticks and then dipped into a sauce for additional flavor.

For your judgment call

Don’t get me wrong – both are good. However, I just can’t ignore the fact that Japanese BBQ offers higher quality meat. To help your judgment, please visit and compare the high-end BBQ restaurants so that you can taste what I’m talking about: