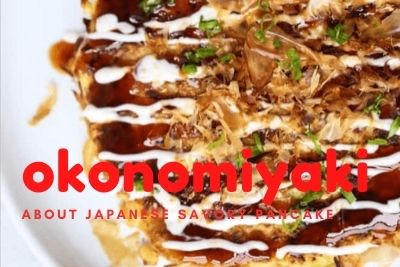 Okonomiyaki (お好み焼き) is a Japanese savory cabbage pancake (not for breakfast) with various toppings.

What makes “okonomiyaki” fun is the fact that you can put whatever toppings you want – there’s no rule. Yes, there are some regional styles and popular topping combinations. However, the topping options are endless – as the name says “to one’s liking”.

Unlike sushi, okonomiyaki is very homey food that we Japanese often cook at home. Traditionally, you often see it at festivals and on the street. The dish is available all over Japan – particularly popular in the cities of Hiroshima and Osaka.

There are 2 types of okonomiyaki restaurants:

Okonomiyaki was invented prior to World War II in Japan. It became popular during and after the war due to a shortage of rice supply. It was served as a snack to kids because it was filling and required only a little flour and whatever available vegetables and ingredients.

The earliest origins of a basic crepe-like pancake date back to the Edo period (1683-1868) period where these were a special dessert served at Buddhist ceremonies called “Funoyaki“.

You can make the batter from scratch, or purchase “Okonomiyaki flour premix“.

You mix all the ingredients. My mom always put some ground “Yamaimo” (slimy potato when grounded) into the batter for a fluffier texture. That’s just an option. Easy, right? For Osaka style, you mix shredded cabbage with the batter.

You can also add some garnishes in the batter like “tenkasu” (crispy bits of tempura batter), red pickled ginger, dried shrimp, and green onions, etc. It’s all up to you.

Instead of making your own batter, you can purchase “Okonomiyaki pancake premix” which already contains flour, dashi stock powder, some seasonings, and baking powder.

You still need to add egg and water to the flour mix to make the batter. I even saw some premix that doesn’t even require egg since it’s already included in the mix. Check the ingredients first so you won’t miss the necessary ingredients when you use the premix.

No rules on toppings, but those are some popular toppings for okonomiyaki. Protein wise, you’ll see a lot more pork and seafood than beef (You rarely see beef and chicken in Okonomiyaki). In addition, cheese and mochi are extremely popular and make okonomiyaki extra tasty!

You can put whatever you want, but I’ll show you some popular topping combinations.

You can’t miss any of these ingredients to top it off when you eat okonomiyaki. You can buy those at Japanese markets or buy them online. Those are especially hard to find at regular supermarkets.

You can buy it at the Japanese market or online. It tastes similar to A-1 sauce, but it’s a lot thicker consistency. You can also substitute it with “Bulldog sauce” (Japanese A-1 sauce – but it’s a lot tastier. It’s also called “Tonkatsu” sauce used for pork cutlet), if you can’t find “Okonomiyaki” sauce.

Make your own “Okonomiyaki” sauce

American mayonnaise tastes nasty – bland to me since I grew up with Japanese Kewpie (QP) mayonnaise. Japanese mayonnaise contains more egg yolks – so the color is more yellow and tastes better (also lots of MSG – Japanese use MSG quite a lot). You can purchase it at Japanese markets or online – even some Asian markets carry it now.

Aonori is “seaweed”, but not the same one you see at sushi bar. Japan has many types of seaweed: wakame (for miso soup), nori (for sushi), kombu (for broth). We use the specific name for each type of seaweed to identify instead of just calling them “seaweed”. Because every seaweed has a specific purpose and dishes to go with.

Aonori is used for flavor and color: the must-have ingredient you sprinkle for okonomiyaki, yaki-soba, takoyaki, and more. Japanese often use it for various dishes as seasonings.

Bonito flakes (“Katsuo bushi” in Japanese) give the okonomiyaki the flavor, the looks, and texture. If you don’t like the “fishy” smell, you don’t need to use them.

It shouldn’t be the fancy best tasting white/light yellowish pickled ginger you see at the sushi bar. The cheap, shredded, artificial-colored red pickled ginger (“beni shoga” – “beni” means red, “shoga” is ginger in Japanese) – that’s what you need for okonomiyaki. Compared with the ones at a sushi bar, it has a bit of bitterness and crunchiness.

Pickled ginger can be mixed into the batter or garnish later sprinkling on top of Okonomiyaki. I prefer the latter because it keeps the crunchiness and adds a bring color contrasting the colors of sauces.

“Tenkasu” is a tempura byproduct. Tenkasu is small bits of batter that you can get while making tempura. We don’t toss those small pieces – we recycle them. It adds both flavor and crispy texture to Okonomiyaki. You can buy those at Japanese markets or make your own. Make a tempura batter, deep-fried them by drizzling the batter with a spoon to make the small balls.

Lucensosergia lucens is a species of shrimp popularly known as the “sakura shrimp” or “sakura ebi“. The translucent pink shrimp derives its name from sakura, the Japanese word for the cherry blossom. The species grows to about 4–5 cm and lives primarily in Suruga Bay in Shizuoka Prefecture, Japan, where it is caught to be eaten. It is also caught in Taiwan, China. Those tiny and bright pink shrimps are dried and used often as a garnish on various traditional Japanese dishes like Okonomiyaki.

You can put whatever you want for your okonomiyaki toppings, but there are 3 major regional styles in Japan. Kansai style is the main version of Okonomiyaki and the most common around Japan.

“Monjayaki” is originated in the Tsukishima area of Tokyo, popular throughout the Kanto region.

“Monjayaki” is a bit different from “okonomiyaki” since it’s NOT a pancake – semi-liquid okonomiyaki.

The ingredients are almost the same as Kansai-style okonomiyaki. But the batter is a lot watery with finely chopped ingredients to cook it to a soft, gooey texture.

Right before eating, spread portions of batter more thinly on the plate grill with individual-sized-“hera” (small spoon size spatula) so that it caramelizes to a crispier texture on the base. Then, you eat it straight from the grill and in almost liquid form, not a pancake form. I know it sounds strange, but it tastes good!

My friends from Osaka didn’t like the uncooked texture, but Tokyo people love it. It’s strange at first, but it’s different and tasty

Kansai/Osaka-style okonomiyaki is the predominant version of the dish, found throughout most of Japan. It is a more floury savory pancake with the ingredients mixed into the batter, and fry it on a hot, oiled iron flat grill called a “teppan”.

How to make a batter for Osaka style

Because shredded cabbage in the Osaka style is mixed into the batter, the way you shred it and the size of the cabbage is important. You want to have the crispness of cabbage: not too thin or too thick. Once you shred the cabbage, put them into the batter and mix well.

The most common topping of Osaka style is thin pork-belly strips (or bacon) which are called “Buta-dama”. However, you can put whatever you want. Put the toppings into the batter and mix well. If you use bacon or pork belly, put them on after you start cooking the pancake on the grill, not mixing with the batter. Then flip the pancake to cook the bacon more.

Okonomiyaki is very popular in Hiroshima: Hiroshima prefecture has more okonomiyaki restaurants per capita than any other region in the country: + 2,000 in Hiroshima city alone.

When you order “okonomiyaki” in Hiroshima, the layered pancake with noodles and fried egg would come to the table instead of Osaka-style Okonomiyaki.

The ingredients are almost the same ingredient as Osaka-style. However, in Hiroshima, they are layered, not mixed together.

The batter is cooked like a thin crepe and the ingredients are cooked separately. When everything is done, the ingredients are placed on the crepe, the toppings like cabbage, bean sprouts, pork, seafood are added. Finally, top it off with noodles (yakisoba, udon) and a fried egg (the distinctive ingredient of Hiroshima-style).

The amount of cabbage used is usually 3-4 times the amount used in the Osaka style. It starts out piled very high and is pushed down as the cabbage cooks.

Hiroshima style often has plenty of green onion, but the final touch on toppings ultimately vary from restaurant to restaurant.

In Hiroshima, it’s the tradition to use a metal spatula to cut and eat the okonomiyaki.

Other versions of okonomiyaki

Tools you need to make okonomiyaki

You need the exact tools you need for the regular pancake.

You want to cook multiple okonomiyaki at the same time for your family. So it’s best to have a big flat steel plate grill, called “Teppan”. If you don’t own it, you can use your frying pan or flat BBQ grill.

It helps when you flip pancakes or other ingredients. Have 2 of them instead of 1 to make the flip easier.

If you go to “Daiso” (Japanese $1.5 shop), you can buy the “oil brush” you can use for Okonomiyaki and other dishes like takoyaki. Dip the brush into the oil and smear the brush on the surface of the grill (even if it were a non-stick surface). When you cook okonomiyaki, it’s better to put some oil on the grill to make it easier to flip.

Chopsticks or “Hera” to eat okonomiyaki?

It’s no rule – whichever you like. You often see cutting Kansai style okonomiyaki similar to how a pizza is sliced. Then cut into small pieces with chopsticks. That’s how I eat Okonomiyaki – I’m from Tokyo.

In Hiroshima, it’s more common to cut the pancake into squares that are easy to scoop up and eat in one bite with “hera” (spatula specific for okonomiyaki).

The practice of eating with a hera originated in the period where okonomiyaki was sold as quick street food: it’s said that vendors popularized the practice because it saved them from needing to provide plates and chopsticks.