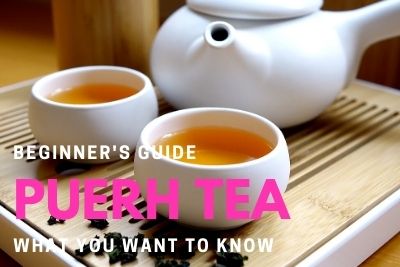 Pu-erh tea, known as “black tea” in the Far East part of the world, originates from the Yunnan province of China and is post-fermented. Do you want to know more? Pu-erh tea 101: beginner’s guide.

Not all the tea we know is true tea. Let’s clarify the difference between true teas and herbal teas.

“True teas” are made using leaves from the tea plant known as Camellia sinensis. Teas made from any other plants are not technically true teas.

In fact, herbal teas aren’t actually real teas. Instead, herbal teas are infusions. They are made either from steeping spices, herbs, and roots in hot water. These ingredients can also be combined with true teas at which point they’re known as flavored teas.

What makes it pu-erh tea?

Pu-erh (Pu’er) tea is an aged, partially fermented tea that is similar to black tea in character. Although there are other types of fermented tea like kombucha, pu-erh tea is different because the leaves themselves are fermented rather than the brewed tea.

Pu’er is a “slow” beverage, intended to be sipped, aged and savored like fine wine. It’s like a fine wine, pu’er has established brands, labels, and revered productions for the iconic status. To be considered true pu’er, the leaves must be grown in Yunnan Province, dried in the sun, come from the plant Camellia sinensis var. assamica, and allowed to ferment over weeks, months, years, or even decades.

Pu-erh teas brew up a brown-black color and have a full body with a rich and earthy taste. Revered in Asia for its health benefits, pu-erh teas are actually post-oxidized.

It is routinely compressed into cakes (“bings”), and wrapped in paper printed with the name of the tea. A cake of pu’er continues to change as it ages, and bits of tea are broken or chipped off – often with a small knife to brew.

It is often more expensive than other “true” teas. The prices vary greatly depending on:

1) Where the leaves were grown

Forest tea is more prized than terrace tea. Some pu’er can be had for just a few dollars per kg, while a few of the more prized producing villages, such as Lao Banzhang, sell maocha (the raw material used to make pu’er) for about $725 per kg.

Well-aged pu-erhs now rank among the most valuable teas in the world, and fresh batches of high quality “maocha” (unfinished tea) are considered long-term investments by collectors. In 2005, 500 g of a 64-year old “vintage” sold for nearly $150k.

The astonishing cost led to a pu’er bubble, with an increase in price between 1999 and 2007 of pu’er forest tea (da shu cha), which is grown in Bulang and Hani in Yunnan, and is thought to taste better. The bubble popped in 2007, when widespread counterfeit pu’er was discovered, and prices then stabilized.

Pu-erh originated in the city of Pu-erh in the Yunnan province of China, and is still primarily produced in the same region today. However, other provinces including Hunan and Guangdong provinces also produced similar aged-teas.

In fact, pu’er is named after a Yunnan town that was a center for trade in the early 17th century, and it’s also one of the few teas that the Chinese government has designated as a protected-origin product. Like Champagne, only teas produced in Yunnan province can officially be called “pu-erh”.

All “pu-erh” tea must come from the southwest region of Yunnan, China. Tea from other provinces can’t be called “pu-erh”.

pu-erh tea is derived from the leaves and stems of the Camellia sinensis plant. It’s made from the leaves of a tree known as the “wild old tree,” which grows in the region.

How Pu-erh tea is made

Pu-erh is initially processed in a way similar to green tea. Leaves are harvested, steamed or pan-fired to halt oxidation, and then shaped and dried. After the leaves dry, they then undergo a fermentation process.

In fact, black and oolong teas oxidize when they are exposed to air. Most teas, unlike pu’erh, don’t undergo fermentation with bacteria and yeasts. That fermentation can produce a wide array of complex flavors – from the poorly processed and moldy to a palate so desirable that some pu’erh has commanded a higher price per gram than silver.

Shou pu-erh: it starts out as a sheng puer, but goes through one more deliberate and accelerated “post fermentation” process to speed up this change into a matter of weeks as opposed to years. It’s a modern, accelerated fermentation method.

Both types of pu-erh are often aged for several years, as the rich and earthy flavors of the tea often improve over time. The pu-erh teas we carry are aged for about three years.

Despite the dark color of pu-erh tea, flavors in this category differ dramatically from other dark styles, like black tea. This is because while black teas leaves darken through oxidation (an enzymatic reaction), pu-erh becomes dark through microbial fermentation.

Rather than being bruised, allowed to oxidize, and then roasted to remove all moisture, pu-erh teas are given a light roast before being heaped or compressed to produce microbial activity within the leaves. Over time, this fermentation creates a unique pungent, ‘earthy’ or ‘funky” taste and breaks down naturally bitter compounds (“tannins”) within the leaf, making it easy to brew without bitterness.

Before aging begins, most pu-erh tea leaves have very high levels of tannins. As with well-aged wines, tannins soften and fade over time in these teas, leaving flavor that is bold, but lacking any trace of the acidity or dryness that tannins produce in other styles. Generally, these aspects are recognized as a component of ‘strong’ tea flavor.

However, the flavors vary tremendously depending of:

Pu-erh is often infused with other flavors such as chocolate (cocoa powder) and chrysanthemum flower. These additions can make pu-erh tea taste much better.

Pu-erh tea is a fermented product that continues to improve in quality as it ages, so if properly stored, it lasts nearly indefinitely.

Keep pu-erh tea cakes in an airtight container in a cool, dark place. If it looks or smells off, or there’s visible mold growing on it, you should toss it.

Pu-erh teas are fairly high in caffeine, containing about the same amount as black tea (half that of a cup of coffee.).

Most people can safely drink up to 3 cups (710 ml) of pu-erh tea per day, unless they’re also consuming large quantities of other caffeinated beverages.

Pu-erh isn’t as well-researched as other “true” teas, but there’s still plenty of evidence to suggest it may have several positive effects: