Ramen 101: Things you wanted to know about amazing Japanese ramen 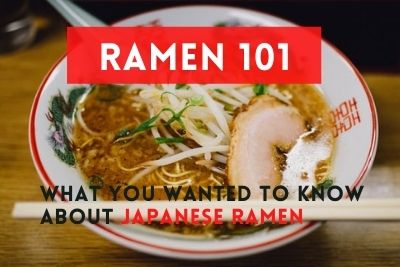 Ramen is popular worldwide like Sushi as Japanese food. Ramen is a noodle soup originally from China. Japanese improved and refined it with unique twists. You might think ramen to Japanese is just like a hot dog to Americans. Yes, it is in a sense. Ramen is a very casual, comfort food to Japanese. However, it won’t just end there – ramen isn’t just ramen for Japanese.

Ramen in the US

If you think ramen you get in the US is great, think again. The level of ramen in Japan is simply no comparison to the ones in the US. I even think some instant noodles from Japan taste better than many ramens at ramen shops in CA (it’s true! Try “chukazanmai” – so good!). In fact, there’s even a Michelin star rated “instant” cup ramen (by “Nakiryu”: 2nd ramen shop with a Michelin star in Japan). “Tsuta” ramen is the first ramen shop in the world to ever win a Michelin star.

While the Japanese have so many other dishes to enjoy other than ramen, ramen is so popular in Japan. Japan (similar size to California) alone has more than 32,000 ramen shops throughout the country. Ramen competitions in Japan are seriously fierce. Mediocre ramen shops definitely won’t survive. Many of them are small, popular ones are packed with lines out the door to the block ahead during lunch/dinner time.

In addition, the Japanese never settle with so-so food and always try to find tasty foods – super finicky eaters. Ramen chefs spend hours to overnight to broth alone for perfection. Other important elements like toppings and noodles are also paid huge attention as much as the broth.

Real good ramen in Japan is so deep, sophisticated, and incredibly tasty – a well-established dish that is Michelin-star worthy.

Every prefecture on the island and even specific cities within prefectures prepares its own take on the noodle soup and noodle. Not just the regional flare – every shop does their own things – varieties are just endless.

Ramen is one of the 4 major noodles found in Japan.

Ramen is extremely regional and hundreds of styles available. Let’s deconstruct ramen so that you can understand every element better.

Noodles (“men” in Japanese) totally vary depending on the regions and shops: some ramen shops serve thick and chewy noodles, while others offer thinner, less-glutenous specimens. Some make their own noodles, some buy from the noodle manufacturers. However, many shops let you choose the thickness/doneness up to your liking.

As raw ramen noodles are alkaline, have some flour dusted on them, they have to be boiled separately from the soup.

If one noodle isn’t enough for you, you can order only additional noodle(s), which is called “kaedama”. Why do we do this? 1) It’s cheaper than ordering another bowl. 2) You just want a noodle, not a broth nor toppings.

Basic ramen broth doesn’t have too many ingredients. However, the recipes really vary depending on the shops. There are some elements to distinguish each broth style.

The broth base is the main ingredients simmered to make the soup. Some ramen shops offer multiple base options (from chicken to vegan) with single/multiple “tare”. Variations that combine the different bases are common – it really varies depending on the ramen shops.

For Ramen, broth and flavor are separate things. This is one of the unique things about ramen.

Typically, the ramen soup is salty because it’s not meant to drink it as a soup. It’s meant to be more like a “dipping sauce”! Once the noodle is in the soup, the saltiness will be mild out and create a perfect saltiness. If it weren’t salty, the noodle overpowers the soup and it gets bland. That’s why the ramen soup is a bit saltier than typical soups. Yes, many Japanese drink it all, but not all. I personally don’t drink it all, though I sip a bit. It’s a lot different concepts from noodle soups in other Asian countries.

Ramen soup isn’t like a consomme soup – many people don’t know this. Don’t complain it’s too salty! It’s supposed to be! It’s NOT a soup, dipping sauce!

Ramen is usually defined by its flavor which affects its final taste.

“Tare”: the sauce to flavor the broth. Ingredients of tare vary from each ramen shop. Typically it’s added to each individual bowl instead of mixing with the broth directly.
In that way, the ramen shop could offer different ramen flavors, from soy to miso, with the same broth yet different flavors. Some ramen shops offer a single base option with multiple “tare”. Some ramen shops offer multiple base options (from chicken to vegan) with single/multiple “tare”s.

Types of Ramen: By “Tare”

There are 4 major types of Japanese ramen, depending on the base flavor (tare):

While it’s possible to find any of these ramen flavors pretty much anywhere you go in Japan, different areas have become known for their own unique regional variations.

“Miso” can be made from typically soybeans or rice and colored white or red.  This style is originated in Japan’s Hokkaido prefecture in the 60s, but it has spread all over the country. It is considered the youngest of the ramen broths.

“Shio” means salt in Japanese and is a traditional flavor. All Western broths would be considered of the Shio type. However, typically you see “shio” ramen a lot in northern Japan like Hokkaido.

“Shoyu” means soy sauce in Japanese and this is the next oldest flavor type. It’s a basic base for the Kanto area (around Tokyo).

It’s the single most commonly found type of ramen, and was invented in 1910 at “Rairaiken” in Tokyo. This soy sauce is not your typical soy sauce: typically a special sauce with additional ingredients.

“Tonkotsu” means pork bone and it’s a basic base for the Kyushu area (Southwestern area). It was born in Fukuoka. It’s technically not “tare” since it is the broth and contains either salt or soy sauce as “tare”. The coloring and consistency come from the boiling of pork bones and fat on high heat for many hours (this could be 12 to 20 hours). It is often fortified with pork and/or chicken fat.

The use of pork bones doesn’t automatically mean the soup is of the Tonkotsu type. If the pork bones are boiled whole for a relatively shorter period, the result is just regular pork broth.

A popular sub-category of tonkotsu ramen originated in Fukuoka. This super milky-white, extra-rich tonkotsu is often served with thin, hard noodles and minimal toppings. The reason being, the shop that invented Hakata ramen was just a stand without chairs, and serving quick-cooking thin noodles for fast customer service. Other Kyushu regions serve thicker noodles and different takes on the tonkotsu broth.

A large variety of ingredients are used as ramen toppings. While ramen usually come with specific toppings, shops often allow customers to add extra toppings. Though there are typical toppings for certain ramen, they totally vary depending on shops.

Ramen shops offer some side dishes though ramen is considered as a dish. The varieties depend on the shops, but these are the typical side dishes.

Ramen has evolved over the past century along geographical lines. Each region, even the city levels, adds its own local flair to the ramen by the local ingredients.

In Yonezawa, the dish is called “Chinese soba”, not ramen.

“Taiwan ramen,” Nagoya’s local style of ramen isn’t from Taiwan. Taiwanese chef who invented it based on Taiwanese “danzai” noodles.

A typical Kyoto ramen is made with a soy sauce-based broth and features straight noodles in a thick and heavy soup. Another popular Kyoto-style ramen has pork oil poured onto the soup for extra flavor and richness.

Onomichi is a seaside town in Hiroshima prefecture located on the Seto Inland Sea, so their regional style of ramen is made with fresh local seafood.

Tokushima style ramen is the most popular style of ramen on Shikoku Island (the smallest of the 4 main islands). The people in Tokuyama consider ramen as something to eat with rice. All ramen restaurants offer white rice on the side, some of them will even give it to you on the house.

A sub-variation of the Tokushima style is Wakayama style ramen. Wakayama is on the main island of Honshu, just across the inland sea from Tokushima which is probably why Wakayama Ramen can be described as a Tokyo style. You’ll get a bowl of tonkotsu-shoyu ramen that blends together the pork bone broth popular in western Japan and the soy sauce-based ramen broth popular in eastern Japan.

In Wakayama, it is usually referred to as “chuka-soba” (Chinese noodles). It is often served with “haya-zushi” ( a traditional Kansai-style pressed sushi made with pickled mackerel) on the side.

It was invented by a Chinese cook as affordable fast food for the Chinese students who were studying there. Different versions exist in Japan, Korea and China. “Champon” is practically the only ramen from Kyushu which doesn’t use a Tonkotsu soup. Unlike other ramen dishes, only 1 pan is needed as the noodles are boiled in the soup.

Tonkotsu type ramen originated on the Southern island of Kyushu where most of Japan’s pig farming is done. It’s recognized as the standard version of tonkotsu ramen.

A close cousin of Hakata Ramen. This is thought of as the origin of Tonkotsu ramen. Kurume style tonkotsu is boiled longer than the other two styles and the resulting broth is so rich that it doesn’t require the addition of fat at the end. Historically, the previous day’s excess stock is added to the next day – the pot is never emptied.

Although it was originally invented as a variation of Kurume ramen, over the years, Kumamoto ramen has developed into its unique style.

Kagoshima is home to Kurobuta pork, which makes their chashu all the more delicious.

Okinawa was once an independent archipelago separate from the rest of Japan as “Ryuku Kingdom”. Ryuku had its own distinctive language, culture, and food. Okinawans is known to have longevity due to their diet. The noodles themselves, while called “soba”, are actually more similar to udon flour noodles but are served in a ramen-style broth.

There are 2 kinds of instant noodles:

Super convenient – all you do is to pour hot water into the cup and wait for 3 minutes. You don’t need to cook nor worry about going bad for months. When you feel like it, you can eat it right away with minimal efforts. It’s also tasty, too! What not to like?

The packaged noodles contain noodles and packages of soup seasonings. The noodle can be dry, fresh or frozen. Unlike a cup noodle, you must cook in the saucepan and need a bowl to put the ramen when it’s ready to eat. There are various types – from the simple one with a seasoning package to higher taste quality ones (though how to cook it is exactly the same). It’s surprising that you can get decent ramen with very fractional costs and ease.

HOW TO COOK: Just follow the instructions on the package!

Where to find ramen

The best way is at a specialized ramen shop, though you can find other options easily.

How to eat ramen

Eat ramen with chopsticks and a Chinese style soup spoon. There is no particularly strict etiquette for eating ramen, but I give you some tips: